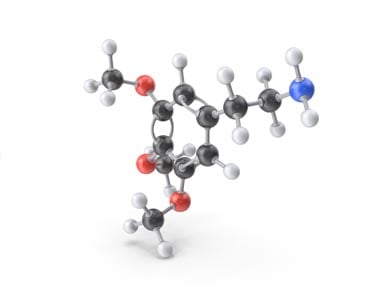 Mescaline, found in the peyote cactus, is a hallucinogenic drug that causes altered perceptions of reality and illusions or hallucinations. From the earliest records, the substance has been used by Native Americans for religious rites and ceremonies. Mescaline can also be created synthetically. Peyote and mescaline are both classified as a Schedule I substance because they have a high potential for drug abuse, and there is no known peyote medical use.

According to a 2015 study from the National Center for Biotechnology Information, in the United States, over 8 million people, or 3% of those who are over the age of 12, have used mescaline in some form during their lifetime, including synthetic mescaline. Of the 8 million, 5.5 million used the naturally occurring mescaline in peyote at least once.

What is Peyote and Mescaline?

The names peyote and mescaline are often used interchangeably, but they are different. The hallucinogen that actually causes the “trip” or euphoria is mescaline, which is a naturally occurring substance that is retrieved from the peyote cactus.

Peyote is a small, spineless cactus that grows in the southwestern United States—primarily in southern Texas—and throughout northern Mexico. The Native Americans in those areas use peyote in religious rites, and according to the National Center for Biotechnology Information, some cultures consider the hallucinogen as being of divine origin.

The top of the cactus, called the crown, has disc-shaped buttons that are cut off from the root and then dried. According to DrugAbuse.gov, the buttons can then be chewed, or the buttons can be soaked in water to create a liquid form of the drug.

The drug is primarily ingested through chewing the dried buttons or drinking the liquid, but because the taste is bitter, some people will brew it into a tea. Less commonly, peyote buttons can be ground into a powder and inserted into a gel capsule or smoked with cannabis or tobacco, according to CampusDrugPrevention.gov.

Peyote Side Effects and Addiction Symptoms

The effects and dangers of mescaline and of mescaline addiction are similar to those of LSD, psilocybin, and PCP. As with all hallucinogens, mescaline affects how someone perceives reality. The primary symptoms are hallucinations, altered perceptions of space and time, altered body image, and illusions.

The substance can cause a euphoria that can be followed by anxiety. Peyote use can also cause intense nausea and vomiting, pupil dilation, increased heart rate and blood pressure, higher body temperature and perspiration, headaches, weakness, and impaired coordination. A recent study on DrugAbuse.gov noted that mescaline has been observed to cause fetal abnormalities.

Mescaline can cause a sense of euphoria, which is a state of intense happiness or excitement. A typical hallucinogenic dosage for mescaline is between 0.3 and 0.5 grams, and its effects—including euphoria—can last for 12 hours, according to DrugAbuse.gov. The prolonged state of euphoria is why some people choose to use hallucinogens, and it also causes some people to abuse peyote, leading to addiction.

Hallucinogens such as mescaline can become addictive. The addiction is usually to the psychological effects brought on by mescaline rather than a chemical addiction. Though the research has been limited, there is evidence of mescaline tolerance and the potential for a mescaline overdose, according to DrugAbuse.gov.

We look forward to answering your questions about peyote and mescaline abuse and addiction treatment, and we are eager to support you in your healing process as you reclaim the life you desire. Call us at (801) 438-3185 to learn more.

The Phoenix Recovery Center is driven by this guiding mission statement: “Empowering individuals and families suffering from addiction and mental health disorders to celebrate life through lasting solutions.”

Peyote and mescaline addiction treatment at The Phoenix Recovery Center is carefully tailored and defined by research. We make every effort to support recovery and outcomes that prepare patients and their families to manage mental health disorders and to reclaim a meaningful life. We equip those we help with the tools they need to overcome peyote abuse, including both the knowledge and the applied behaviors they need to continue on a path to success.

If you or a loved one is suffering from an addiction